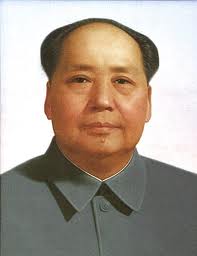 Mao Zedong-
Mao Zedong was born as the son of a peasant farmer in Chaochan,
China in 1893. He was the founder of the People’s Republic China. Mao was one of
the earliest members of the CCP (The Chinese Communist Party) the party was
established in 1912. In 1958 Mao Declared ’The Great Leap forward’.He withdrew
this command in 1962 as the idea failed. As the result of the ’The Great Leap
forward’ Mao retired from the post of chairman of the People Republic of China.

In 1958, Mao Declared ‘The Great Leap forward’.This was an
attempt to increase farming and factory production. Mao decided to establish
large agricultural towns that were massive. The population in each town grew to
an average of 75,000 people. Each family were given equal parts of the profits
and a small block of land. Three years went by and disaster struck. Floods and
bad whether hurt the cycle of the crops. The process was also hurt when Russia
decided to withdraw the technical experts working with the country. In 1962
Mao’s scheme came to an end and the country took to it traditional way for
economic production.


The Cultural Revolution of
China-

The culture Revolution of china was a political movement that
took place in 1966 to 1976. The leader of the movement was Mao Zedong, at the
time he was the Chairman of the China Communist Party. His goal was for all to
be equal.  Mao wanted to in force
orthodoxy upon the government and the people. The revolution marked the return
of Mao Zedong to power within the government after the fail of the Great Leap
Forward. The movement froze the country politically and economically.

Deng Xiaoping was the leader of China from 1978 to 1997. He was
the last of the revolutionary rulers in China. Deng Xiaoping became ruler two
years after the death of Mao Zedong. When Deng was ruler his goal was to
modernise China and to learn from other countries. In the time that Deng was
ruler China the economy rose up and became one of the world’s largest and most
successful economise.


The bodies that rule China