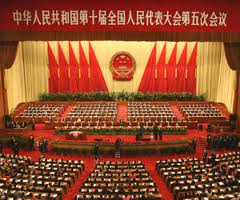 Communism is China’s form of Government. In a communist country
the government owns all of the land, businesses, education rights and welfare.
In a Communist country everyone is treated equally. The government pays everyone
the same amount of money, even if you are a doctor and you have studied for many
years, you get payed the same amount as a factory worker. This system is
designed to let the poor rise up and be equally treated and have the same amount
of money as upper class people in the society. China became a Communist country in 1949 and is now the only
major country in the world to use this system as their form of government. China
has gone through many changes since the revolution and now is more flexible and
open with its way of running the country.

In a Constitutionally Monarchy there is a constitution, which is
a set of rules about how the country should be run and how the parliament should
work. It is a democratic government which has the queen or king as the head of
state. The monarchy has no power in the parliament. In Australia she or he is
represented by the governor general.  The parliament however makes and passes
all of the laws. The Prime minister is the head of the
parliament.

Democracy is a form of government that involves people voting in
the party not the reprehensive. In a
Democracy…

Everyone over the age of 18 have the right to vote.
All voting is privet.
Each person is only allowed one vote.
Elections are held regularly.
All members of the parliament are elected in.
The result of the election is excepted by the people.
Groups and parties can nominate people to stand for election.
In a democracy there is one head party and one opposing party.
A party is a group of people in parliament that have certain beliefs.

In a republic there is a head of government. He/she is elected
by the people. Sometimes the president is the head of state, like in the United
States of America. Presidents are elected for an amount of time, this time is
called a term. The most terms you are allowed to run in is 2. Each term is 4
years, but in between each term there is another election. So the most time you
can run for is 8 years. After you have finished your term/ terms you have to
step down from the roll as president and let someone else take your place.